Undervalued' GBP/USD tipped as a buy at CBA this week. 'Fair value' seen near 1.55 amid repricing of BoE outlook. As vaccine success leaves economy eyeing top of board.

The Pound-to-Dollar rate is this week struggling to recover back above 1.39, but Sterling remains significantly undervalued on at least one important metric according to strategists at Commonwealth Bank of Australia (CBA) who’ve tipped the currency as a buy in anticipation of a further rally in the year ahead.

Sterling remained the best performing major currency of 2021 while recovering ground ceded to the Dollar during last week’s bonfire in the bond market, which has abated thus far in the new week and ahead of two large U.S. government bond auctions due on Wednesday and Thursday.

The Pound-to-Dollar rate rose sharply off the week’s opening level near 1.3820 to probe briefly above 1.39 but improved UK economic prospects mean it could have much further to rise later this year and thereafter.

“We now predict GBP will gain significantly from undervalued levels. Look to buy GBP/USD at current levels (1.3865) with a tight stop loss at 1.3720,” says Elias Haddad, a senior FX strategist at CBA. “Purchasing-power-parity based on relative GDP deflators is around 1.5500. Second, the UK current account deficit is the smallest since Q1 2012. This means GBP no longer needs to trade at a significant discount to its fundamental equilibrium to attract foreign savings.” 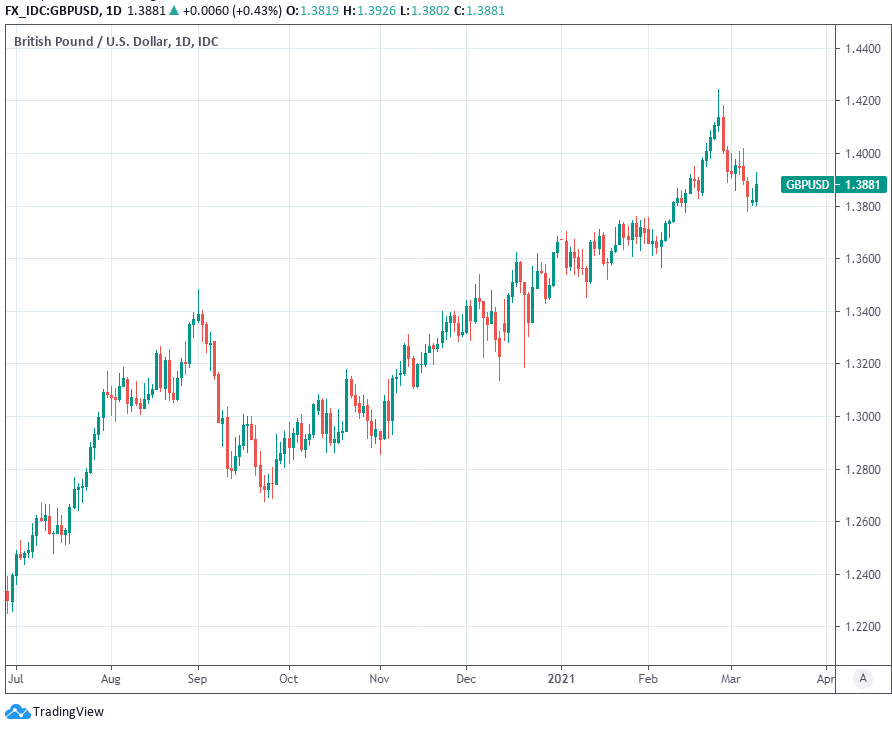 Cramer Says He Sold Some Ether After Record Highs To Put…

The UK’s early start vaccinating has enabled it to pull ahead of all other countries except the U.S. and Israel while in the process offering the economy a shot at reopening and recovery before others in Europe. But with HM Treasury extending its emergency programs for months more in last week’s budget, the economy will also benefit from a fiscal tailwind worth a double-digit clip of GDP as it reopens in spring and summer.

As a result UK growth is now widely forecast to be among the fastest in the developed world this year and market expectations for interest rates at the Bank of England (BoE) have been rising, although CBA’s Haddad says the latter still have “room to adjust higher in favour of GBP.” Expectations have risen elsewhere too lately and most notably the U.S. where a sell-off in the government bond market spilled over into other debt markets before eventually also upending stocks and commodities these last few weeks.

“The pound’s positive drivers remain unchanged: it has rolled out vaccinations quicker than most and the BoE may lay out a tapering of asset purchases at its Mar 18 meeting. Those factors should continue to lift the GBP above the rest, especially if murmurs of an earlier reopening surface,” says Shaun Osborne, chief FX strategist at Scotiabank. “GBP may find itself trading in a 1 cent range between 1.39 and 1.40 if it manages to clear the level today.”

Investors Bracing For Bank Of Canada To Taper As Decision Looms

Uber Losses Dramatically Improve Thanks To Sale Of Self-driving Unit

Mark Zuckerberg Can No Longer Deflect Blame For Trump’s…

Inflation, Interest Rates, And The CBN’s Quest To Defend The Naira

More than 1 million new $1,400 stimulus checks have been…