Nordea: Risk of Inflation Misread on US Jobs Data, Year-End Euro to Dollar Target Maintained at 1.1500 on Dollar Rebound

The latest US jobs data was again below expectations, but Nordea considers that the labour market is tighter than portrayed by the data as many older workers have effectively left the labour force. 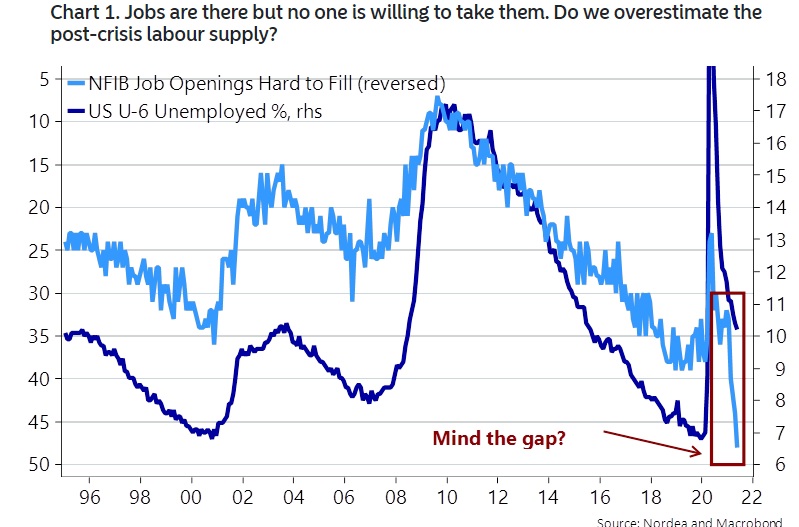 Above: US labour-market chart

In this context, the bank considers that wider US inflation pressures are likely to increase and the government spending binge will exacerbate upward pressure on prices.

Nordea expects that the Fed will eventually have to respond forcefully which will help trigger a sharp dollar comeback, especially with a dovish ECB policy.

Overall, the bank maintains a year-end Euro to Dollar (EUR/USD) exchange rate of 1.1500.

Nordea illustrates the risk that central banks and governments are making important mistakes with extremely loose monetary and fiscal policies which will increase the risk of an inflation blow-out.

The issue is just that the economic response to a crisis is always calibrated on the back of the most recent economic crisis (recency bias), but two crises never look similar.

In this context, Nordea considers the risk that policymakers will look to take lessons the great financial crisis when demand was weak and policy was too tight which undermined recovery attempts.

If, however, the larger problem this time around is supply difficulties rather than weakness in demand, then strong fiscal spending will tend to amplify inflation.

Nordea adds; “The risk is now that we act on Covid-19 as if it is a demand-crisis, which it is obviously not. The potential endgame of massive public spending during a supply shock crisis is a so-called “bottleneck crisis”; maybe exactly what we are already in the midst of.”

EU-China Investment Deal Is Still Possible —But Not Before…

Risk of Complacency over US Inflation

According to Nordea, there is an important risk that markets are under-estimating underlying inflation pressures with the jobs data fuelling the misread.

“We are currently stuck in the “it is just temporary” narrative as the market doesn’t even bother caring about huge directional upside surprises to the inflation index as long as it seems driven by bottle-necked sectors such as commodity markets and used cars.”

Nordea notes that there may be some inflation relief later in the third quarter as the strong year-on-year impact from food and energy prices will start to fade.

The bank, however, also warns that underlying inflation pressures are rising with the cost of housing an important element in triggering a wider surge in inflation which would destabilise markets.

Higher housing costs would increase pressure for a Fed response.

“Either the Fed responds to this inflation wave, or else they simply end up slaughtering the USD.”

Nordea does not expect significant developments at this week’s ECB policy meeting, but it continues to warn over the potentially important implications of any shift in inflation target.

The inflation review is currently in progress and likely to conclude in the autumn. Hints over the outcome are likely at the ECB banking conference (SINTRA) in late September.

“Nothing much will happen at the ECB meeting next week, but the Sintra conference after summer will prove to be interesting.”

A dovish stance would tend to put downward pressure on the Euro.

Tudor Jones Likes Bitcoin, Calls It A Great Portfolio Diversifier To Protect His…

These Stocks With Pricing Power Could Keep Thriving As Inflation Rises, According To…

Central Bank Of Nigeria To Unveil Digital Naira This Year

Goldman Sachs sees oil rallying into the summer. Here are…

These stocks could be big winners if interest rates continue…