British billionaire Richard Branson on Sunday soared more than 50 miles above the New Mexico desert aboard his Virgin Galactic rocket plane and safely returned in the vehicle’s first fully crewed test flight to space, a symbolic milestone for a venture he started 17 years ago.

Branson, one of six Virgin Galactic Holding Inc (SPCE.N) employees strapped in for the ride, touted the mission as a precursor to a new era of space tourism, with the company he founded in 2004 poised to begin commercial operations next year.

“We’re here to make space more accessible to all,” an exuberant Branson, 70, said shortly after embracing his grandchildren following the flight. “Welcome to the dawn of a new space age.

The success of the flight also gave the flamboyant entrepreneur bragging rights in a highly publicized rivalry with fellow billionaire Jeff Bezos, the Amazon (AMZN.O) online retail mogul who had hoped to fly into space first aboard his own space company’s rocket.

“Congratulations on the flight,” Bezos said on Instagram. “Can’t wait to join the club!”

Space industry executives, future customers and other well-wishers were on hand for a festive gathering to witness the launch, which was livestreamed in a presentation hosted by late-night television comedian Stephen Colbert. Joining the reception was another billionaire space industry pioneer, Elon Musk, who is also founder of electric carmaker Tesla Inc (TSLA.O).

The gleaming white spaceplane was carried aloft attached to the underside of the dual-fuselage jet VMS Eve (named for Branson’s late mother) from Spaceport America, a state-owned facility near the aptly named town of Truth or Consequences. Virgin Galactic leases a large section of the facility.

Reaching its high-altitude launch point at about 46,000 feet, the VSS Unity passenger rocket plane was released from the mothership and fell away as the crew ignited its rocket, sending it streaking straight upward at supersonic speed to the blackness of space some 53 miles (86 km) high.

The spaceplane’s contrail was clearly visible from the ground as it soared through the upper atmosphere, to the cheers of the crowd below.

Meta And Africa No Filter Partners To Promote Use Of Virtual…

At the apex of the climb with the rocket shut down, the crew then experienced a few minutes of microgravity, before the spaceplane shifted into re-entry mode, and began a gliding descent to a runway back at the spaceport. The entire flight lasted about an hour.

“I was once a child with a dream looking up to the stars. Now I’m an adult in a spaceship looking down to our beautiful Earth,” Branson said in a video from space.

Back at a celebration with supporters from a stage outside Virgin Galactic’s Gateway to Space complex at the spaceport, he and crewmates doused one another with champagne.

Virgin Galactic has said it plans at least two further test flights of the spaceplane in the months ahead before beginning regular commercial operation in 2022. One of those flights will carry four Italian astronauts-in-training, according to company CEO Michael Colglazier.

He said 600 wealthy would-be citizen astronauts have also booked reservations, priced at around $250,000 per ticket for the exhilaration of supersonic flight, weightlessness and the spectacle of spaceflight. 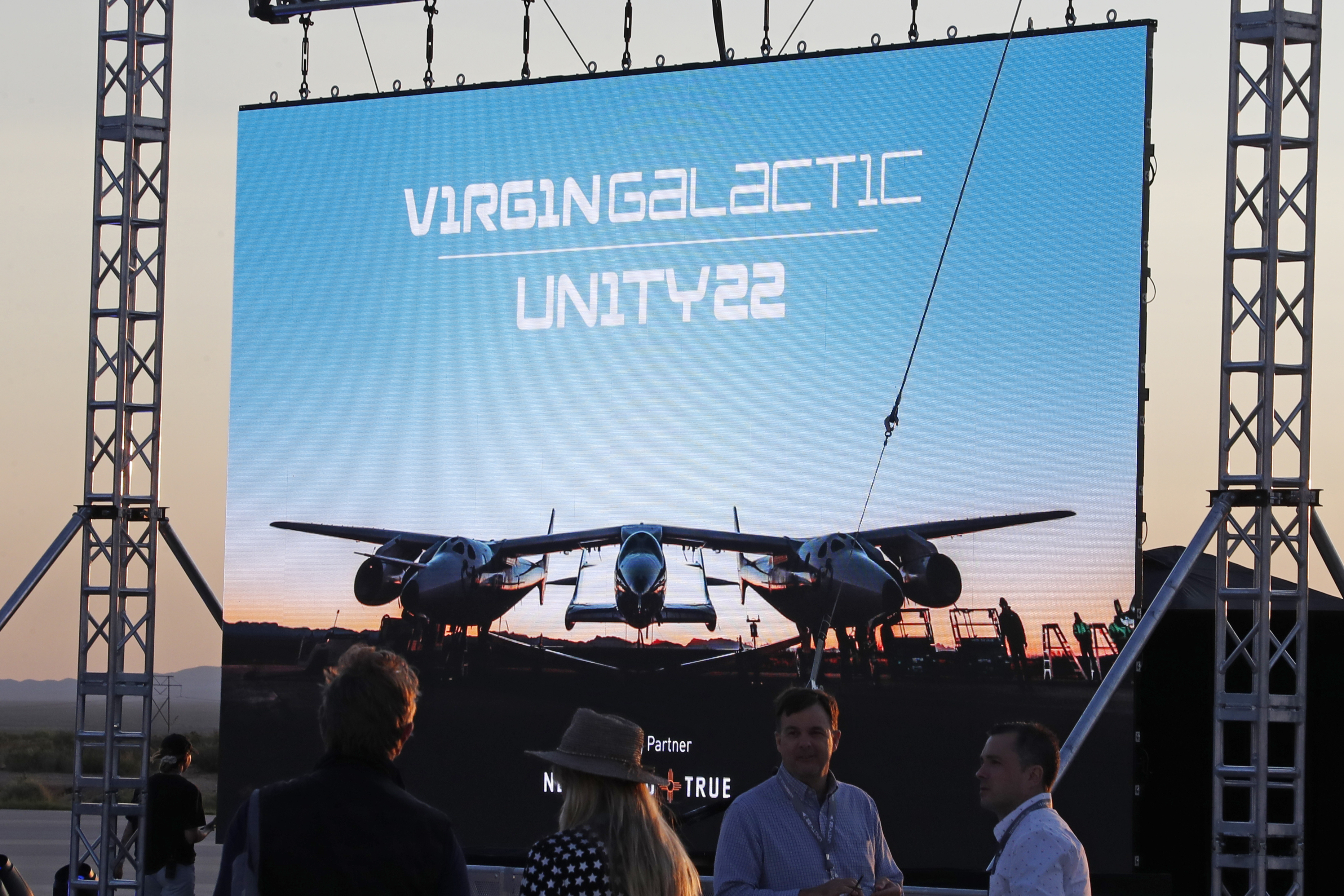 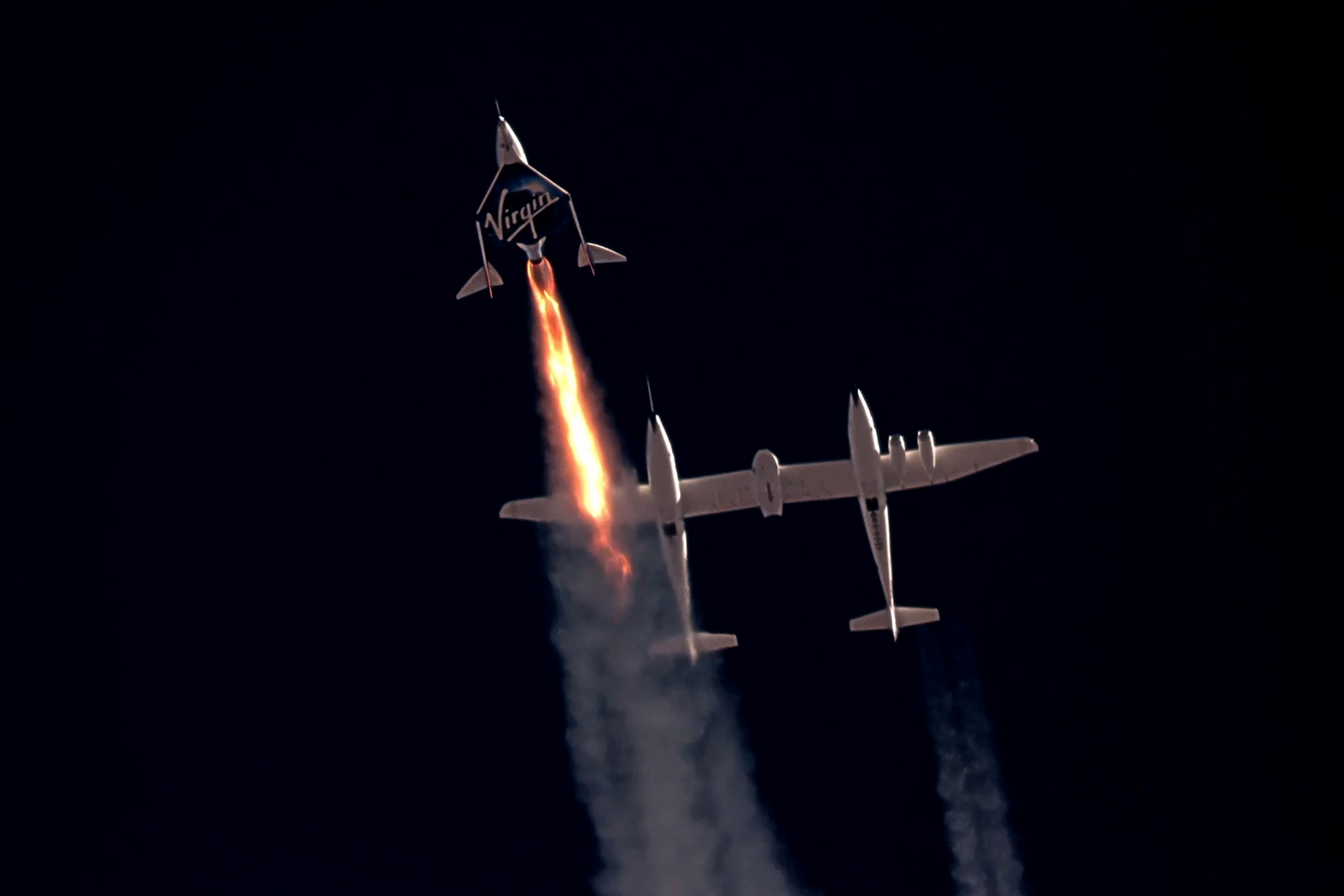 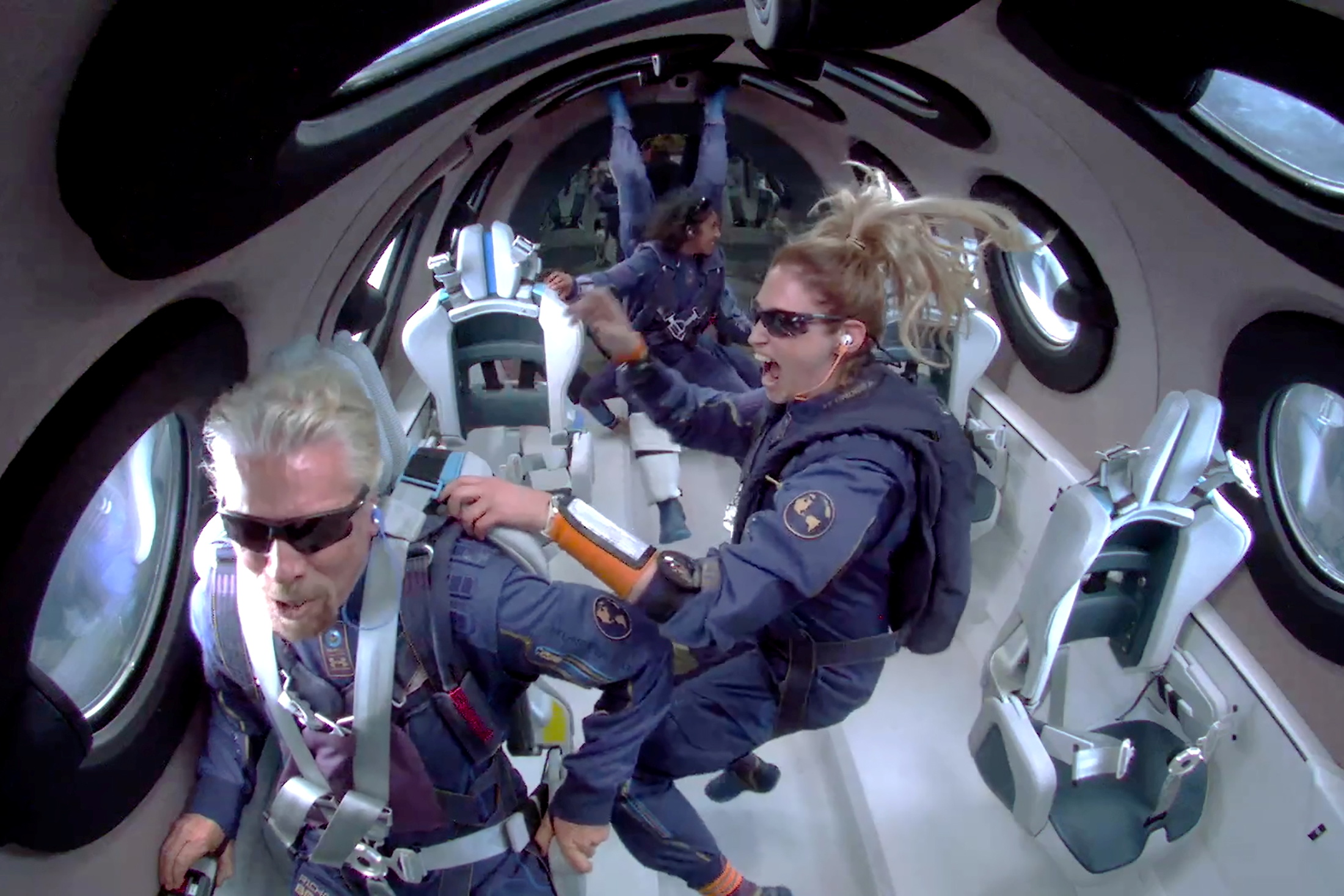 Virgin Galactic’s passenger rocket plane VSS Unity, carrying Richard Branson and crew, begins its ascent to the edge of space above Spaceport America near Truth or Consequences, New Mexico, U.S. July 11, 2021 in a still image from video. Virgin Galactic/Handout via REUTERS. NO RESALES. NO ARCHIVES. THIS IMAGE HAS BEEN SUPPLIED BY A THIRD PARTY.

Branson has said he aims ultimately to lower the price to around $40,000 per seat as the company ramps up service, achieving greater economies of scale. Colglazier said he envisions eventually building a large enough fleet to accommodate roughly 400 flights annually at the spaceport.

The Swiss-based investment bank UBS has estimated the potential value of the space tourism market reaching $3 billion annually by 2030.

Proving rocket travel safe for the public is key.

An earlier prototype of the Virgin Galactic rocket plane crashed during a test flight over California’s Mojave Desert in 2014, killing one pilot and seriously injuring another.

Branson’s participation in Sunday’s flight, announced just over a week ago, typified his persona as the daredevil executive whose various Virgin brands – from airlines to music companies – have long been associated with his ocean-crossing exploits in sailboats and hot-air balloons.

His ride-along also upstaged rival astro-tourism venture Blue Origin and its founder, Bezos, in what has been popularized as the “billionaire space race.” Bezos has been planning to fly aboard his own suborbital rocketship, the New Shepard, later this month.

Branson has insisted he and Bezos are friendly rivals and were not racing to beat one another into space.

“We wish Jeff the absolute best and that he will get up and enjoy his flight,” Branson said at a post-flight press conference.

Blue Origin, however, has disparaged Virgin Galactic as falling short of a true spaceflight experience, saying that unlike Unity, Bezos’s New Shepard tops the 62-mile-high-mark (100 km), called the Kármán line, set by an international aeronautics body as defining the boundary between Earth’s atmosphere and space.

“New Shepard was designed to fly above the Kármán line so none of our astronauts have an asterisk next to their name,” Blue Origin said in a series of Twitter posts on Friday.

However, U.S. space agency NASA and the U.S. Air Force both define an astronaut as anyone who has flown higher than 50 miles (80 km).

A third player in the space tourism sector, Musk’s SpaceX, plans to send its first all-civilian crew (without Musk) into orbit in September, after having already launched numerous cargo payloads and astronauts to the International Space Station for NASA.

All recounted afterward being mesmerized by the view through Unity’s windows. Mackay described the immense blackness of space against the brightness of Earth’s surface, “separated by the beautiful blue atmosphere, which is very complex and very thin.”

“Cameras don’t do it justice,” he told reporters. “You have to see it with your own eyes.”

ECB To Change Policy Guidance At Next Meeting, Lagarde Says

Senate To Mandate Bill For Bank To Demand TIN

South Africa Mobiz Raise $4 Million In Pre-Series A Round

Algeria’s Yassir Lands A Healthy Series A From…