The dollar came under pressure on Monday and was heading for its second consecutive monthly loss against the euro and the pound, as traders assessed the impact of a surge in U.S. inflation before monthly jobs data later this week.

On Friday, data showing a key measure of U.S. inflation at a 29-year high briefly boosted the dollar to a two-week high.

In holiday-thinned trade, investors weighed the impact on U.S. assets of rising price pressures and a dovish Fed. Despite rising inflation, markets don’t expect a rate hike well into the back end of 2022.

The core PCE price index vaulted 3.1% on Friday, the largest annual gain since July 1992, due to a recovery from the pandemic and various supply disruptions. read more

The market considers current inflation levels in the U.S. to be transitional. Next year’s U.S. inflation will remain at 2.5%, Ulrich Leuchtmann, Commerzbank’s head of FX and commodity research wrote in a note.

“That does not make it any easier pricing USD,” he said. “Until we have more clarity the dollar is likely to have found a good balance at current levels”.

NNPC Gets Approval To Fix 21 Federal Roads At N621.2bn 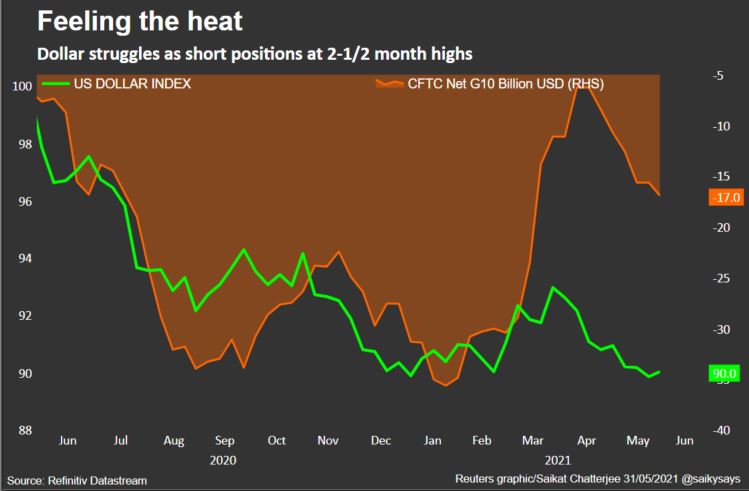 The Chinese yuan hit a three-year high against the dollar before falling back following a chorus of warnings from Chinese officials against speculative bets on the currency.

The offshore yuan changed hands at 6.3698 per dollar after touching overnight its highest since May 2018 of 6.3553 per dollar .

The main event of the week will be U.S. payrolls on Friday with median forecasts at 650,000 but the outcome is uncertain following April’s shockingly weak 266,000 gain.

How Wema Bank Is Supporting Nigerians With Loan Offerings

Crypto Startup QuickNode Raises $35 Million In Series A Funding Round

FG To Review Licence Of Some Power Distribution Companies…

Tesla Major Investor Has Made $6 Billion On His Investment