The dollar slumped to its lowest in nearly two years on Thursday, as investors continued to sell the greenback on expectations a surge in coronavirus cases will make it difficult for the U.S. economy.

By contrast, the euro rose to its highest since early October 2018 after breaching the technically important $1.16 level on Wednesday and was up for a fifth straight day against the dollar, still basking in the glow of the European recovery fund approved earlier this week.

“Speculators are pretty underweight a lot of the G10 currencies so there is room for this momentum move to keep going,” said Erik Nelson, currency strategist at Wells Fargo Securities in New York.

“The biggest risk that it stops and the dollar starts to regain its legs is equities, if the equity rally really starts to falter and we see a big move lower then all of a sudden dollar strength is going to come back very quickly.”

A rise in U.S. jobless claims last week, for the first time in four months, also added to pressure on the dollar, as a persistent increase in COVID-19 cases has put an apparent recovery in the labor market on stall speed and dampened consumer demand. 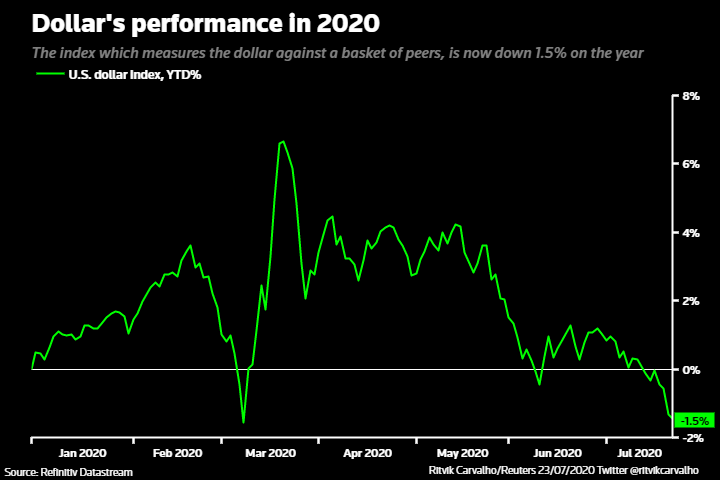 U.S. coronavirus cases topped 4 million on Thursday, with over 2,600 new cases every hour on average, the highest rate in the world, according to a Reuters tally.

In afternoon trading, the dollar index was down 0.3% at 94.725 =USD, after hitting its lowest since late September 2018. It has lost nearly 8% since its March 20 peak, when a global dollar funding crunch saw a surge in demand. The index is down 1.3% on the week and on pace for its fifth straight weekly decline.

The dollar briefly strengthened after U.S. Treasury Secretary Steven Mnuchin said the U.S. government will protect the stability of the currency. White House officials and U.S. Senate Republican leaders also continued to work towards a proposal for a new round of aid to buttress the economy.

The U.S. currency was also down 0.46% against the Swiss franc at 0.9252 franc CHF=EBS. Earlier it dropped to a more than four-month low.

Elsewhere, China’s offshore yuan recovered losses somewhat from an earlier slide against the U.S. dollar, which was last down 0.1% at 7.0113 yuan CNH=EBS.

China said the U.S. move on Tuesday to close its Houston consulate this week had “severely harmed” relations and warned it “must” retaliate, without further details.

Executive Order On Ease Of Doing Business In Nigeria: Knuckling Down To Get Business Done