The British pound fell on Wednesday on rising concern that the Brexit transition period will end without a deal between Britain and the EU, and foggy economic prospects as the country emerges from its coronavirus lockdown.

The fact that the United Kingdom, now out of the European Union, will not be part of the bloc’s 750 billion euro (683 billion pounds) recovery package “is not helping the pound,” said Kenneth Broux, head of corporate research at Societe Generale.

On top of that, euro/sterling may be bouncing off the lows it fell to recently when central banks were possibly rebalancing their reserve requirements, said Broux.

Britain’s debt levels are rising as it scrambles for ways to prevent a possible wave of COVID-19-induced unemployment. Broux said flash Purchasing Managers’ Index (PMI) readings for July this week are likely to highlight the divergence between Britain and the continent’s big economies.

Data on Tuesday showed British government borrowing hit a record 127.9 billion pounds in the first three months of the 2020/21 financial year which began on April 1.

Sterling was last trading down 0.3% versus the dollar at $1.27 and versus a broadly stronger euro it was 0.6% lower at 91.13 pence. Broux said it was unlikely that euro/sterling was establishing a new range above 90, however, as those levels “typically don’t endure a long time”.

Graphics: Sterling falls vs euro above 91 pence – here Some of the declines in the British currency have been attributed to worries around Britain’s break with the EU. 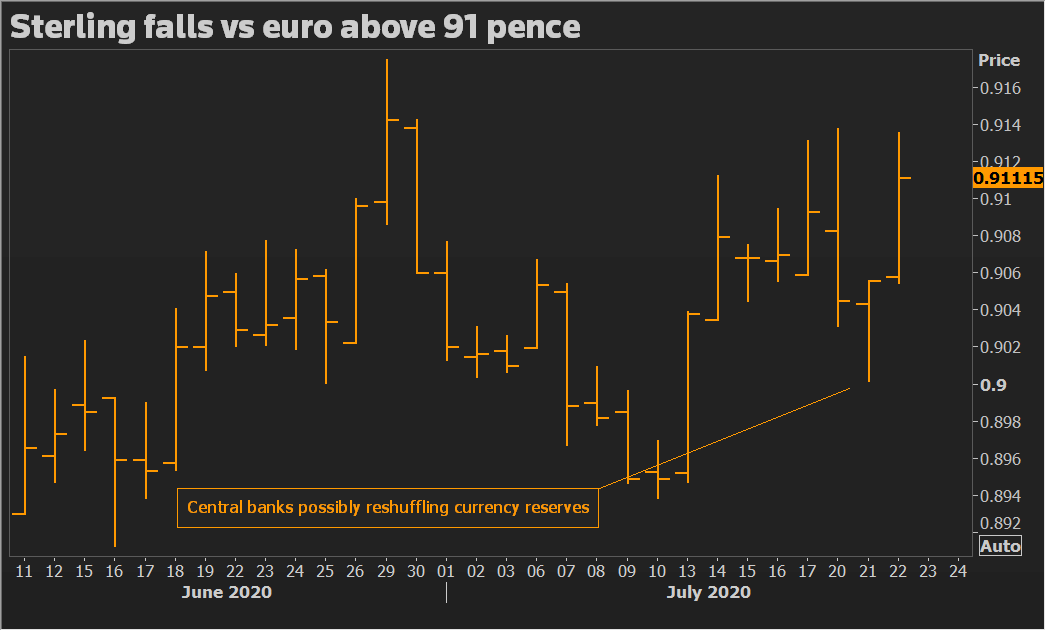 “The performance of the pound in recent weeks suggests Brexit risks are starting to play a role,” said Derek Halpenny, head of research at MUFG.

Brexit has taken a back-seat during the pandemic, but with a transition period set to expire at year-end, the clock is ticking for Britain to reach a trade deal with the bloc.

That followed a report in the Daily Telegraph that suggested the two sides may fail to agree, with only a few days left before Prime Minister Boris Johnson’s July deadline.

The Financial Times reported the British government has also abandoned hopes of clinching a U.S. free trade deal ahead of November’s presidential election there, with officials blaming the novel coronavirus outbreak for slow progress.

Africa Starts To Have Second Thoughts About That Chinese Money