Way before the name ‘Nigeria’ was chosen, in the period that saw the rise and reign of powerful empires and kingdoms, the belt of Northern Nigeria was once a cradle of civilization and superiority. One of its major advantages was the ‘Sahara desert’; its major trade route that allowed the influx of Arabian Merchants and many other visitors into the belly of kingdoms like Kaduna, Zaria, Kano, Sokoto and Kano.

This trade route opened the region to development in many spheres of life as far back as 1300 A.D. from Architecture, arts and craft, war-fare, food, literacy and commerce. The north was a goldmine waiting to be explored and the entire span of the land was blessed with an almost magical topography, natural resources and nature’s finest gifts.

known as Hausa Bakwai were states with mind-blowing historical stories that could make you sincerely believe the tales of Disney’s “Aladdin and the Magic Lamp” is real. Well, if you can set your imagination free, then the stories of the legends in Northern Nigeria are real.

From the Legend of Queen Amina of Zazzau (Modern Day Zaria), who ruled the kingdom from 1589-1633. Her exploits were so great that some people find it hard to believe she existed. Ruling Zazzau with an iron fist, she invented the use of metal armour for her soldiers, and thus laid the foundation for sophisticated warfare in the region. And while she was at this, she made regions around Zazzau pay tributes to her kingdom.

A lot of people don’t know that the North is also big in its architecture. Its style and mode of Architectural aesthetics (Tubali Architecture) has been a subject of discussions and analysis by researchers and non-academic who marvel at its beauty and sumptuousness. The famous Gidan Makama Museum in Kano, the Central Mosque in Zaria which oozes ancient sophistication and opulence, lastly not forgetting the luxurious magnificent royal palace of the emir of Dutse which represents nothing but northern royal luxury, aristocracy and grace.

In 1904 when the British forces attacked the ancient city of Kano, Sir Frederick Lugard, then High Commissioner of the British Protectorate of Northern Nigeria, said: “The extent and formidable nature of the fortifications surpassed the best-informed anticipations of our officers, needless to say, that I have never seen or even imagined anything like it in Africa.” That was how marvelled he was at the beauty and the force of the Kano City walls. 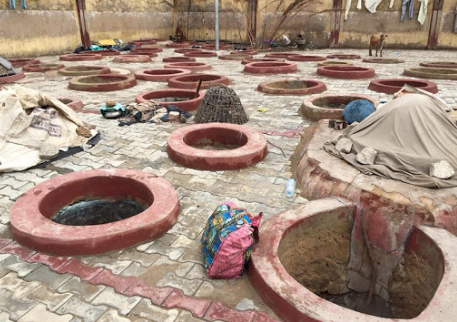 The foundation of the walls was laid in 1135 A.D by Sarki Usman Gijimasu Bagauda and over an 802-year period, the wall was built in stages – the last recorded construction phase was done by Seriki Alhaji Bayero between 1934 and 1937. Declared as a National Monument in 1959, the great city walls of Kano City is one of UNESCO’S world heritage sites.

Another historical beauty in Northern Nigeria is the famous Kano Dye Pit also known as the Kofa Mata Dye Pits. Founded in 1498, the famous dye centre is said to be the oldest in Africa. Let us not forget that the ancient city of Kano is also known for its incredible leather industry which has been in existence for over 100 years and is also a major supplier for most of the prolific fashion and clothing brands all around the world, including Gucci and Louis Vuitton.

The Kano Tannery is known for its exotic leather from Cow, Snake, Crocodile and all kinds of exotic animals.

In Arts and Culture, Nigeria’s Northern region holds its head up high with the famous Durbar Festival, originally conceived as a military parade, the origin of the word ‘Dubar’ comes from Urdu Darbar (dar meaning door and bar meaning entry or audience). This practice dates back to over 200 years ago and is now being celebrated as a cultural festival to mark the end of the Holy Month of Ramadan.

The Northern Pride can also be seen in the famous Argungu festival in Kebbi State. This fishing festival that attracts over 50,000 fishermen all over the country and beyond, and recorded the catch of the biggest fish weighing 78 kilograms during the 2020 edition of the festival.

Re-vitalization of Tourism in Northern Nigeria would make the north a billion-dollar industry; the world needs to see the magnificence of the Matsirga Falls in Kafanchan, Kaduna, the Splendor of Gashaka Gumti National Park in Taraba, the aquatic beauty of the Gurara Waterfalls in Niger State, and lastly not forgetting the incredible magical landscape of the sand dunes in Yobe State that reminds one of the fabled tales of the Arabian Night.

However, the urgency to change the narrative of Northern Nigeria has never been more imminent than it is now. Beneath the chaos and ruin lie beauty and a magical world of stories and wealth untold. It’s time to create that safe passage to the North.

Only 9% of Kenyans work Full-time, Permanently.

Chinese and Mota-Engil Enterprises are Shortlisted for a $2.5 billion Bridge…

University Employees in the UK go on Strike.

Recession affects Businesses in the Manufacturing, Oil, and Service Sectors.

Apple is interested in making a $5.8 billion purchase of Manchester United.