The months ahead may be more daunting for the real sector as government’s debt-funding plans at higher costs threaten to crowd out private sector investments and stifle local manufacturing. The scenario is the same at both national and sub national levels.

The current Federal Government has come under severe attacks in recent times for its alleged penchant for debt, which, at current level (Q1 of 2020), stands at N28.63 trillion, according to the National Bureau of Statistics (NBS). The nation’s data body also said that a total of N3.69 trillion was incurred in just one year, representing a 15 per cent increase from the N24.94 trillion it was at the same period last year.

While the external debt stands at N9.99 trillion (34.89 per cent), N18.64 trillion (65.11 per cent) represents the domestic component of the domestic. Both components, according to industry experts, have their respective burdens. Whereas the foreign component of the national debt puts pressure on government’s ability to service existing loans or offset them at maturity (when naira continues to devalue against the dollar), the second component competes directly with the private sector for available funds.

With N5.37 trillion (almost 50 percent) deficit billed to be funded by “domestic and foreign borrowing” in the just-signed 2020 national budget, economists said the towering public debt profile would push the economy to the precipice.

Most states, like the Federal Government, have adjusted their 2020 budgets, in response to the COVID-19 pandemic and its impacts on revenues. But even with the adjustment, no state wants to bite the bullet and roll back expenditure to suit the lean income. Rather, there are holes waiting to be plugged with debts.

Unfortunately, the international market, which, according to Professor of Economics Sheriffdeen Tella, is “happy doing business with Africa’s love for foreign loans” stands on one leg. This has not only forced government to look inwards, as admitted by the Minister of Finance, Budget and National Planning, Zainab Ahmed, but may also lead to cut-throat offers that will pull the scarce liquidity from other windows and make cost of private-sector borrowing unaffordable.

“This will not encourage productivity from Nigerians or increase the personal income that can be taxed in the future. We are accumulating so much for Nigerians who are already prostrate,” he said, adding that the excessive public sector borrowing will increase impacts of the recent increase in value-added tax (VAT).

On ability of the public sector to mobilize funds, Zakka said government had a better guarantee and likely to offer better interest.

“So, private investors will not be able to compete with the government. The interest rate will be unaffordable by private sector.

“Once we get to that stage, Nigeria will further fall into melancholy. Then, the fate of the naira will be worse than we currently have. It should worry us that the naira has been devalued twice this year. But believe me, it will be worse in the nearest future if the real sector is allowed to die.”

questioned the sustainability of Nigeria’s borrowing culture when the sources dry up, saying the country “may not be able to borrow from the Paris Club anymore” just as the World Bank and the International Monetary Fund (IMF) will not continue to lend to it indefinitely.

Indeed, private and corporate investors consider public investment assets more attractive than those floated by private organisations. For instance, at 11.2 per cent rate, the third Sukuk bond issued amid liquidity crunch offered a negative real interest rate. Still, it was oversubscribed by 446 per cent, even in the face of a liquidity crunch. 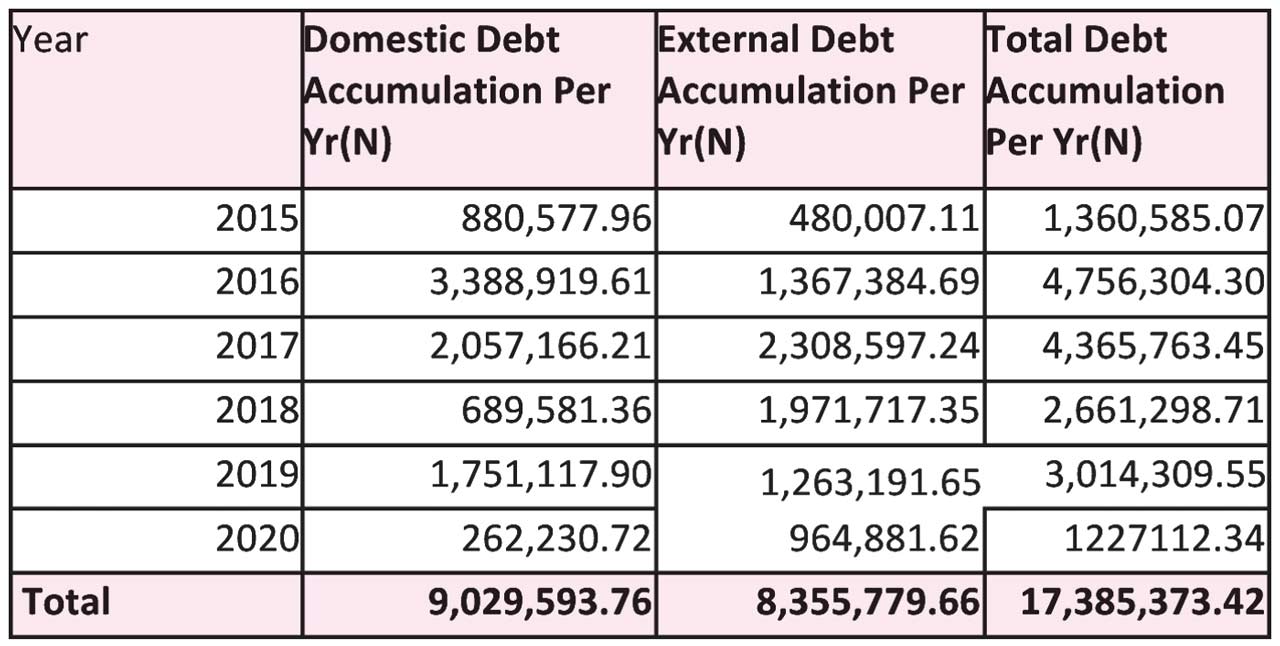 On the contrary, private sector bonds with more promising returns issued in recent times attracted cautious response, highlighting the preference for safety, according to Professor of Economics Ken Ife, over Return on Investment (ROI).

With impacts of COVID-19 yet to be fully determined, investors have even become more averse. Ife, who said he is currently working with the Securities and Exchange Commission (SEC) on a national savings scheme aimed at mobilising funds outside the banking system for public and private sector investments, admitted that safety was the watchword of investment.

Ife noted that the domestic market could absorb the bloated debt needs of government without unsettling the private sector, as “there is more outside the banking sector.” He said, with attractive interest rates, in addition to the safety nets that government offer, the untapped goldmine outside the banking system could be converted to a catalyst for public infrastructure development.

“We should not forget that we have the pension fund that runs into several trillion; that can also be tapped,” The professor said. According to him, “The planned national savings scheme is aimed at mobilising trillions of naira. People are even worried about where to keep their assets in the face of the current uncertainty. People are fleeing the stock market because of what is happening. Where would they go? They are going into government security.”

Tella, who earlier advised government to shun dollar-denominated debts and turn to local sources, stressed that there were billions of naira “buried in septic tanks and other free money” that could be explored to bridge the gap in national and state budgets. He said much of the stolen money was not accessed by commercial banks, which makes private sector’s crowding-out effect less applicable.

The professor frowned at continuous external debt accumulation, saying foreign lenders are not genuinely interested in the development of poor countries but use the loans as tools of economic slavery. Rather than borrow abroad, he charged government to turn the dormant stolen resources into a productive asset and seek moratorium from overseas lenders.

He continued: “There is the need to ask for a moratorium on our loans and stop borrowing from abroad. There is money to be borrowed in this country, and it is cheaper. The government has been borrowing from the domestic market. Such borrowing can come from the Central Bank of Nigeria (CBN)’s treasury bills, other short-term commercial papers and the capital market. We can create different bonds – five-year, 10-year development, Sukuk and Diaspora – to realise this.

“The fact that all the local bonds floated were oversubscribed means that there is underground money in this country, and the only way to make it productive is through investments in financial instruments like bonds.”

But a professor of political economy and founder of the Centre for Values in Leadership (CVL), Pat Utomi, said Nigeria had had its fair share of borrowing from the domestic market.  He blamed the country’s rising debts on failure of government to channel the proceeds into productive areas. 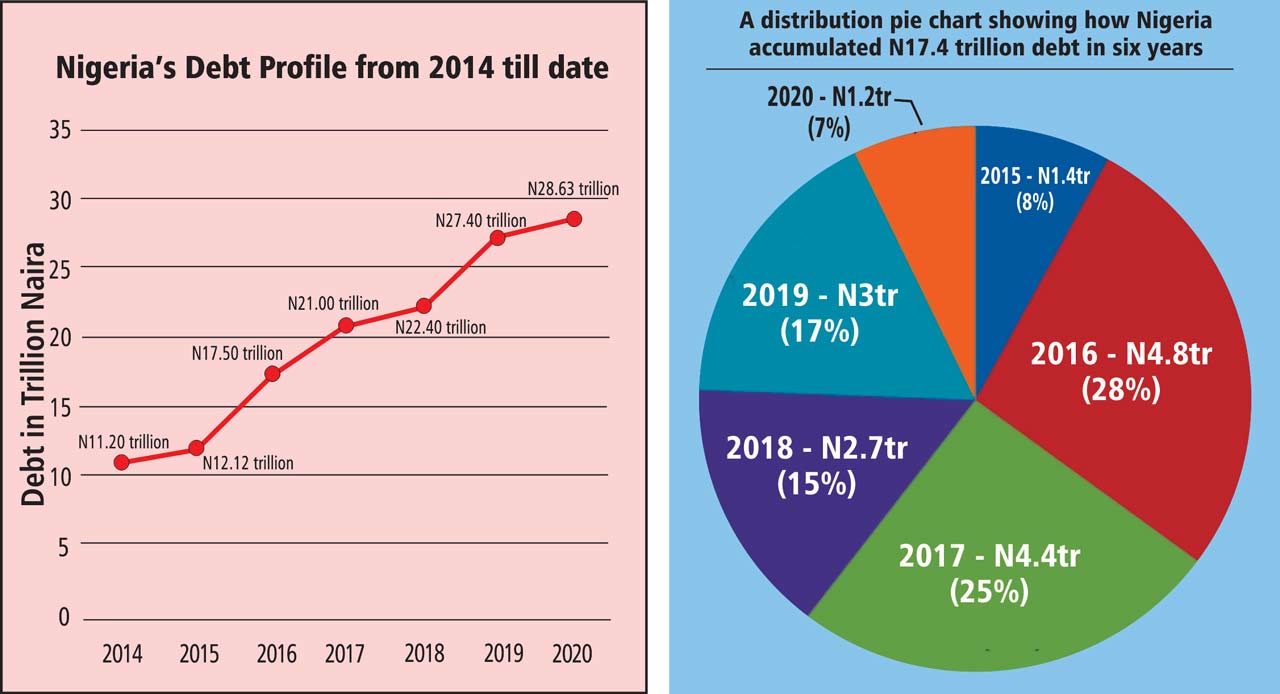 Utomi pointed out that when incurring obligations, whether domestic or foreign, it would be appropriate to deploy such funds to productive activities that would generate enough revenue to service the loans or pay back. “The issue with debt is what we do with it,’ he said.  “Are we getting adequate returns from investment to justify its amortisation? That is the most important issue in borrowing.

“Here, what is important is to use it in a way that it creates an opportunity for wealth creation so that incomes from the investment justify the debt service.”

He said accumulating debt threatens the success of any entity that is not disciplined in management, urging the Debt Management Office (DMO) to create a systematic framework to monitor project plans, implementation and evaluation.

“The ability to service and repay public debts is a research area among economic faculty.  There is an aspect of it that dwells on the choice between tax and debt funding. Debt funding, especially when it is sourced externally in which it cannot distort the domestic financial intermediation, has a higher multiplier effect.

“But economist theorists advise against accumulation of debts if they are not certain the future generation will be richer. Human resource development is critical to future wealth creation. Meanwhile, the two components of developing a productive human resource capital – education and health investments – are in a tailspin, with Nigeria sitting at the bottom of the global Human Development Index (HDI).”

Experts Warn Against Impact Of Naira Devaluation On 2020 Budget

Ukraine Will Not Reopen Gas Route Until It Controls Pipeline System

Kenya Shilling For First Time Hits Sh116 Against The Dollar

IKEA To Spend 3billion Euros On Stores As It Adapts To…